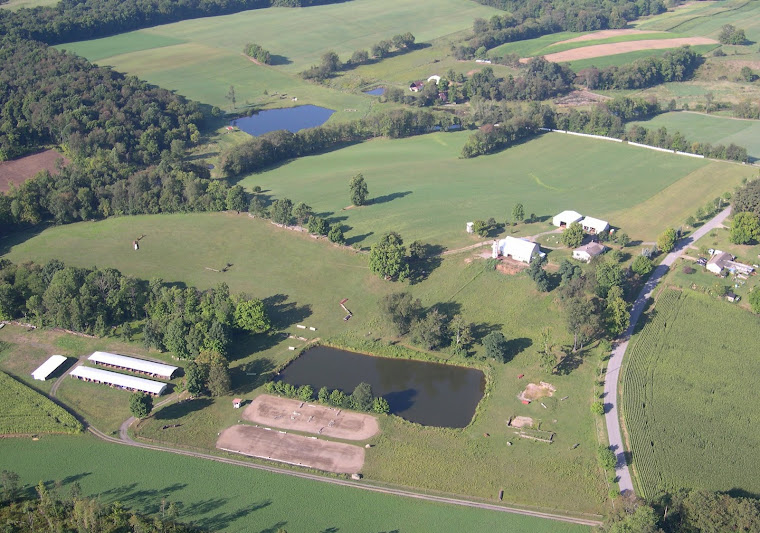 The last competition may be over, but I'm always thinking about ways to make the competitions a little more uses friendly and easier for volunteers.  At the recent jumper show I had the courses numbered as the Black and White courses so we didn't have to change the numbers between classes and so riders could differentiate the courses but that wasn't perfect.  During the events, since we have different tracks for the various levels, we have maps printed complete with fence names so riders can walk their courses a little easier while they are set up for different divisions.  However that still isn't perfect especially if the riders forget to bring the maps with them.  At he last event a rider was walking the course on her cell phone while a friend was at the in gate telling her which fence was next.  So I asked myself what I could do better.

I decided that we would make the numbers different colors to match the cross country numbers; that certainly would help alleviate the confusion.  So this morning I made a prototype on on the computer and printed it up and showed it to Kyle for his input.   The idea is to have the numbers on a free standing support where the numbers slide in and out so they won't blow around and as each level finishes the number gets pulled out. When I showed it to Kyle he thought having all the numbers up during the rounds (even though they were different colors) may, in the heat of competition, still be confusing for the riders.  When he was judging the jumper show a few riders did indeed get confused wile riding and went off course. In addition, with 5 levels the stand is going to be rather large. So what to do?  I still wanted the numbers up so people could easily walk the courses even if it's set for a different level.  Kyle suggested having the number up on the support for the course that is being run at the time with smaller color coded numbers below it for walking courses.

So back to the drawing board.  I think I have come up with something that I think will  work. Since I'm more of a visual person I actually had to make a to scale model.  The overall dimensions are 14" wide by 18" tall.  Below is a picture of to give you an idea.  The large number 2 is for the Beginner Novice course that is course being run and the numbers below it show what number the fence is for the other levels.  And no we're not running Advanced, we will be using the blue for Starter.  So what do you think? 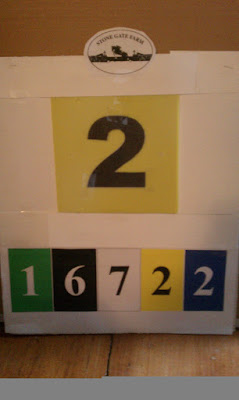 Dave got two of the metal shelters done before the Sept event and although it did rain quite hard on Fri we didn't need them for rain protection during the event, thank goodness.  However they did come in handy for someplace to sit and watch either dressage or show jumping.  The gazebo looking one that is going to go do by the dressage warm up didn't get done in time for the event.  But Dave did manage to  finish framing it in during the event. 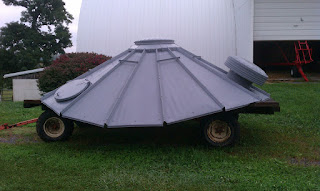 Now all Dave had to do was put the roof on.  Easier said than done.  Actually I really don't know as I wasn't home when it was done.  All I know is that after taking a few measurements to make sure the finished product would actually fit under the garage door Dave put the plan into action.  The plan was to attach a chain to the top of the inside of  metal building, drive the hay wagon with the top on it under the chain, attach it to a chain, hoist it up, pull the hay wagon out from under the top and pull the gazebo frame under it and lower it into place.

Apparently it all went rather smoothly and of course no pictures because all hands were busy helping.  These pictures were taken after the job was done.

Since we got the grain bin from the Van Scoys we have dubbed the structures the VS 1, 2 and 3.  Since this was the last one built this is the VS 3.  It will serve as a place for the dressage volunteers and spectators who are in the warm up area to sit and stay out of the elements.  It was put in place before the hunter pace and it served as a jusge's stand for the recent jumper show and the VS 1(the first one built and near the dressage ring and stabling barn) was used as a secretary's stand.  The VS 1 was also used for the starters and scoring at the Hunter Pace the week before.  It  made for a comfortable place to set up a table and chairs and finally a place where you could actually see the computer screen ;)

Although I was rather skeptical when Dave told be about his "big idea" and even more so when the bin was so floppy when we took it apart; we have 3, albeit unusual looking, useful structures.

For those who did not read the original post be sure to check out  Dave's Big Idea Part 1.   Knowing my husband; I'm sure I'll be reporting on future "big ideas" from Dave.